Fusion Registry can act as an Apache Kafka Producer where specified events are published on definable Kafka topics. It consists of a generalised ‘producer’ interface capable of publishing any information to definable Kafka topics, and a collection of ‘handlers’ for managing specific events.

At present there is only one event handler Structure Notification which publishes changes to any structures as they occur. For changes or modifications to structures, the body of the message is always an SDMX structure message. The format is configurable at the event handler level with choices including:

A ‘tombstone’ message is used for structure deletions with the structure URN in the Kafka Message Key, and a null body.

The list of supported events that can be published to Kafka will be extended over time.

Other events envisaged include:

Configuration is performed through the GUI with 'admin' privileges.

The Connection form configures the parameters needed to connect to the Kafka broker service. 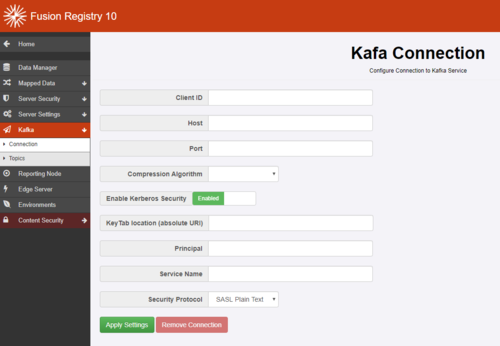 The Topics form allows configuration of which events should be published on Kafka, and on what Kafka Topics.

Kafka Topic is ID of the topic on which to publish.


Each message can be published onto multiple topics by providing a comma separated list of topic names. So 'FOO' publishes on just the single topic specified.
'FOO,BAR' publishes on both FOO and BAR topics.

The form also allows event specific parameters to be set. For Structure Notification, this is the format of the Kafka Message Body

Message publication is not 100% reliable.

Fusion Registry places event messages as they are created onto an internal in-memory Staging Queue. When a message is created, an immediate attempt is made to publish to the Kafka broker cluster. If the publication fails (the Kafka service is unavailable, for instance), the message is returned to the Queue. An independent Queue Processor thread makes periodic attempts to complete the publication of staged messages.

Each individual event message service manages the risk of message loss in a way appropriate for their specific use case. For Structure Notification, the risk is managed by forcing consumers to re-synchronise their complete structural metadata content with the Registry on Registry startup. Even if structure change event messages were lost, Consumers' metadata is reset to a consistent state.

The following Fusion Registry events are available for publication on a Kafka service.

SDMX Structural Metadata is published to definable Kafka topics on Fusion Registry startup and each time structures are added / modified, or deleted. Metadata-driven applications can subscribe to the relevant topic(s) to receive notifications of changes to structures allowing them to maintain an up-to-date replica copy of the structural metadata they need.

Example use cases include:

The SDMX Structure URN is used as the Kafka Message Key. Consumers must therefore be prepared to receive and interpret the key as the Structure URN correctly when processing the message. This is particularly important for structure deletion where the Message Key is the only source of information about which structure is being referred to.

The Kafka Message Body is a normal SDMX structure message, except in the case of deletions where the message has no content (a null payload), and the structure to delete is identified exclusively by its URN in the Message Key. The format of the SDMX structure message is configurable using the Topics form with the following options available:

Addition and Modification of structures both result in an SDMX 'replace' message containing the full content of the structures. Deltas (such as the addition of a Code to a Codelist) are not supported.

Deletion of structures results in a 'tombstone' message, i.e. one with a null payload but the URN of the deleted structure in the Message Key.

Additions and modifications to structures in Fusion Registry are published using Kafka Transactional Messaging to help guarantee consistency by providing:

If a single structure is added or changed, the transaction will contain just that structure.

Transactions will contain multiple structures in cases including:

Subscribers to the Kafka topic must be transaction-aware, and must ensure that each transaction is processed atomically to maintain the referential integrity of their structural metadata replicas.

Under certain conditions, the Fusion Registry Producer will publish all of its structures in a single SDMX Structure Message of the chosen format to Kafka.
These are:

The principle here is to ensure that Consumers have a consistent baseline against which to process subsequent change notifications.

It also mitigates the risk that changes held in the Registry's in-memory queue of messages awaiting Kafka publication were lost on shutdown by forcing Consumers to re-synchronise on Registry startup.

Not Supported: Subscription to Specific Structures

The current implementation does not allow Kafka Consumers to subscribe to changes on specific structures or sets of structures, such as those maintained by a particular Agency. Consumers subscribing to the chosen topic will receive information about all structures and will need to select what they need.

Structure changes made on one instance of Fusion Registry in a cluster are replicated to all of the others through either a shared database polling mechanism, or by Rabbit MQ messaging. An instance receiving information that structures have changed elsewhere in the cluster updates its in-memory SDMX information model accordingly. The update event is however trapped by its Kafka notification processor and published as normal.

Changes are required to the Kafka event processing behaviour of Registries operating in a cluster to arbitrate over which instance publishes the notification on Kafka such that a structure change is notified once and only once, as expected.

The Kafka Structure Notification processor does not enforce Content Security structure rules meaning that all structures are published to the Kafka broker service on the defined topic(s), irrespective of what restrictions may be in place. The risk here is that people or applications that would otherwise not have access to specific structures may be able circumvent the rules normally imposed by Fusion Registry's Content Security sub-system by subscribing to the Structure Notification topic on Kafka. Kafa Streams Security allows control over access to topics. While an all-or-nothing approach of limiting access to all published structures may be sufficient for some applications, it doesn't solve the use case where a consumer should be allowed access to certain structures, but not others.

The Kafka publish-and-subscribe mechanism means that the Fusion Registry producer has no knowledge of who will be consuming the metadata at the point of publication. Up-front decisions therefore have to be made as to what rules to apply when publishing to Kafa. Options include: