Fusion Registry's Structure Mapping function allows datasets to be transformed from one structure and classification scheme to another. Mapping of classifications is performed using Codelist Maps which define how Codes in one Codelist map to those in another.

The main use case for setting Validity Periods on Codelist Maps is to forward schedule changes to the behavior of a map with respect to how classifications are transformed. By way of an example, consider a map that translates a country code dimension into a trading bloc dimension. If it is known that a particular country will move to a different trading bloc on a particular date, two separate rules can be created: one describing the country-bloc mapping before the move, the other describing the mapping after. This is illustrated in the example below:

A DSD with INDICATOR, REF_AREA and FREQ dimensions is transformed into a similar DSD with the addition of a TRADE_BLOC dimension. When defining the mapping rules, most dimensions can be implicitly mapped (an implicit mapping is when the dimension value for each series is simply copied from the source dataset to the target dataset without any transformation). The mapping rules for the TRADE_BLOC dimension however are described using a Codelist Map working from the REF_AREA dimension.

The example below shows how this works in practice: 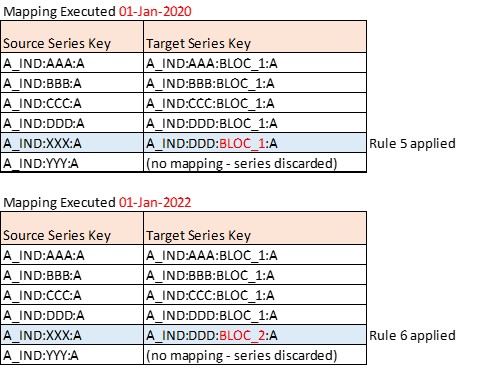 The Source Series with Key A_IND:YYY:A is discarded and does not appear in the transformed dataset because no mapping rule is defined for REF_AREA YYY in the Codelist Map.

The Validity Periods on a Codelist Mapping Rule do not have to be continuous i.e. it is permissible for there to be periods where no rule is valid. In the example below, no rules are valid for the period covering 2017 to 2018. Transformations performed during that period would result in series with AAA in the relevant dimension being discarded.

Fusion Registry ignores ambiguous Codelist Mapping Rules with Validity Periods that overlap as in the example below. In this case, source series with AAA in the relevant dimension are discarded because the Fusion Registry transformation is unable to determine definitively which rule should be applied.

Note that rules with ambiguous Validitory Periods are always ignored, even if only one rule is valid at the time the transformation is performed as would be the case on 01-Jan-2023 in the above example.